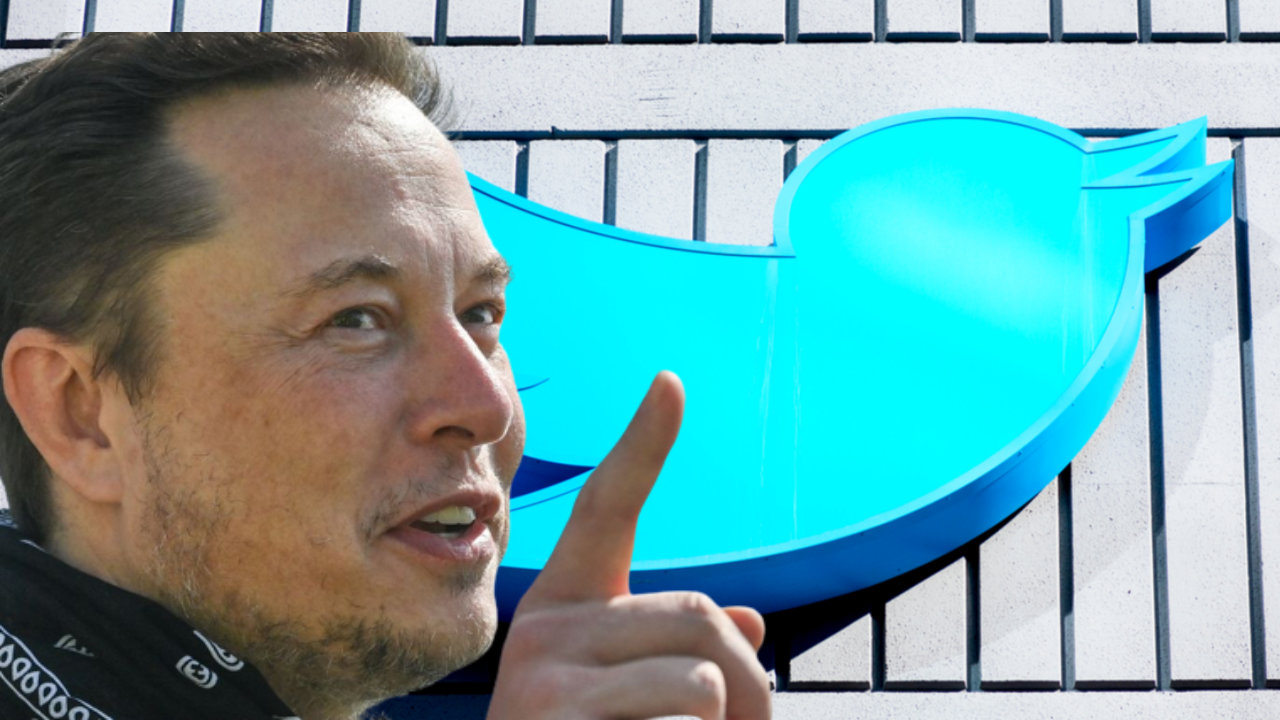 Tesla and Spacex CEO Elon Musk has joined Twitter’s board of directors and promised to “make significant improvements” to the social media platform. Some changes he is considering include adding an edit button and solving the crypto spam bot problem, which he sees as the “single most annoying problem on Twitter.”

After disclosing Monday that he has taken a 9.2% stake in Twitter Inc., Tesla and Spacex CEO Elon Musk has joined Twitter’s board of directors, according to the social media giant’s filing with the U.S. Securities and Exchange Commission (SEC). Musk is now Twitter’s largest shareholder.

Twitter CEO Parag Agrawal tweeted welcoming Musk to his company’s board. The Tesla boss replied: “Looking forward to working with Parag & Twitter board to make significant improvements to Twitter in coming months!” 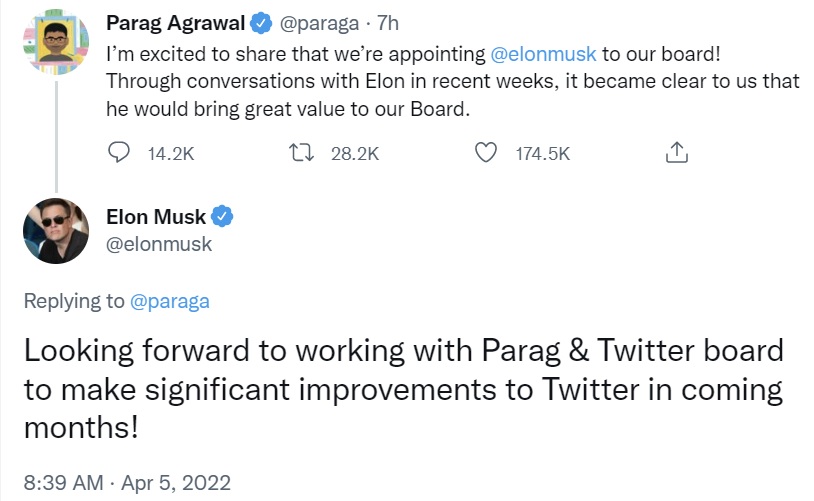 Former Twitter CEO Jack Dorsey tweeted: “I’m really happy Elon is joining the Twitter board! He cares deeply about our world and Twitter’s role in it. Parag and Elon both lead with their hearts, and they will be an incredible team.”

Following Musk’s Twitter investment, many people flooded the Tesla CEO’s tweets with their ideas on how to improve Twitter.

Some suggestions concern crypto spam bots. “Elon, you need to do something about these crypto spam bots,” one person wrote. “They’re getting really annoying. Improving the verification system to prove that you’re an actual *real* human would help with this.” Musk concurred, emphasizing that in his opinion, this is the “single most annoying problem on Twitter.” 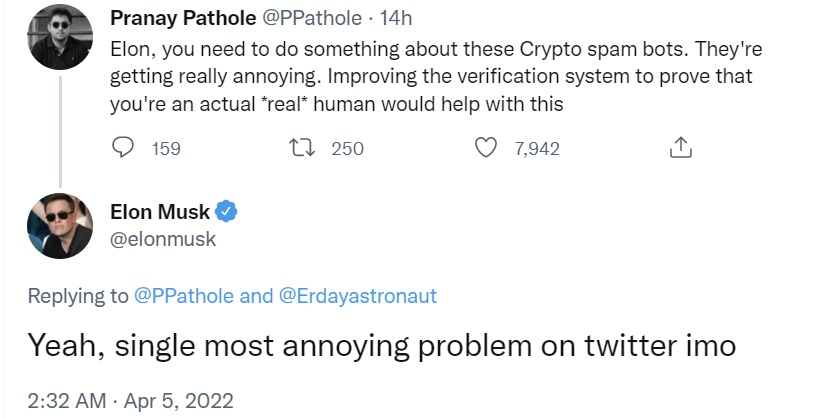 This was not the first time Musk has voiced concerns about the crypto spam bot problem. Crypto spam posts frequently appear on Musk’s tweet threads, and many of them promote crypto giveaway scams. Scammers often capitalize on Musk’s popularity, featuring him and his companies giving away bitcoin and other cryptocurrencies.

Musk tweeted on Feb. 1, 2020: “The crypto scam level on Twitter is reaching new levels. This is not cool.” His statement was made in response to a comment that “Even verified accounts are now being hacked and pushing fake bitcoin scams.”

I think crypto spam bots make up 40% of Twitter.

Besides the crypto spam bot problem, Musk is looking into adding an edit button to tweets. He set up a poll Monday asking his 80.6 million followers, “Do you want an edit button?” The CEO of Twitter stressed: “The consequences of this poll will be important. Please vote carefully.” Over 4.4 million votes were counted and 73.6% said yes.

Twitter user Liz Wheeler argued against having an edit button. She opined: “What if a tweet goes viral, lots of retweets & millions of impressions, & then the author completely changes the meaning? Not just a grammatical fix, but a total ideological change? Or shameless self-promote?”

The CTO of Meta, formerly Facebook, chimed in: “We solved this on Facebook a long time ago. You just include an indicator that it has been edited along with a change log. If you are really worried about embeds they can point to a specific revision in that history but with a link to the latest edit. Not a real issue.” However, Musk replied, “Facebook gives me the willies.”

Musk said at the end of March that he wanted to build a social media platform that focuses on free speech as a top priority. “Given that Twitter serves as the de facto public town square, failing to adhere to free speech principles fundamentally undermines democracy,” he described.

There Are Some Skeptics

Not everyone is confident that Musk will improve Twitter. Regarding free speech, Bloomberg published an opinion piece Monday claiming that “Musk’s Twitter investment could be bad news for free speech.”

One Twitter user expressed his doubt that Musk will make changes that benefit everyone, asserting that the Tesla boss “seems self-centered.” A different user said he will quit Twitter if Musk is in control.

Some people in the crypto community pointed out that Musk’s promise to improve Twitter is a display of the problem with the proof-of-stake (PoS) consensus mechanism, citing its apparent weakness of being controlled by the rich. One wrote:

Elon is showing you how easy it is to control a PoS network.

Do you think Elon Musk will improve Twitter? What changes do you want to see happening? Let us know in the comments section below.